After over a decade of providing educational and arts programs for children in the North End of Middletown, Connecticut, the Green Street Teaching and Learning Center is closing in 2018. Green Street has been an important part of the revitalization of Middletown’s downtown, and a vital link between Wesleyan University’s community of privilege and Middletown’s poor and working class families.  This link is mutually beneficial, providing Wesleyan students with invaluable hands-on experiences in developing programs and working directly with children, and children benefiting from the programs and from engaging with eager, creative undergraduates.

Green Street is also a way out of the ‘bubble’ that so often separates campus life from that of the community around it. When I worked at Wesleyan I thought this was due to where the campus was in Middletown—at the top of a steep hill from Main Street up to High Street. As many of us knew from walking down to have lunch at one of Middletown’s many restaurants and then having to walk back up again, the hill is a physical barrier between Wesleyan and the rest of Middletown.  Then, interviewing at Willamette University in Salem, Oregon, I heard about the Willamette ‘bubble’. In Salem there is no physical barrier between Willamette’s campus and the city, and yet a similar sense of apartness exists there.

The tendency of a campus to focus inward is understandable—it has its mission and plenty of issues to deal with in accomplishing it. But every campus is rooted in a place—a community.  Both the campus and the community are enriched when they are actively engaged with one another. And an engaged university provides its students with powerful examples of volunteerism, social responsibility and the value of rootedness. 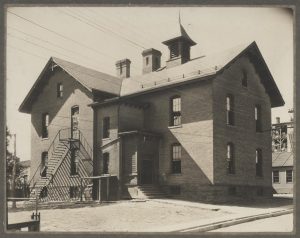 In 2013 Sara MacSorley, Director of Green Street, contacted the Middlesex County Historical Society looking for pictures of the Johnson School, a long unused building which was renovated for Green Street.  I was on the Board of the Society and Sara gave me a tour of the building, enthusiastically describing their programs and plans for the future of the Center.  There were families everywhere, and classes taking place upstairs. It was a magical place.  Sara went on the publish Super Cool Scientists, a coloring book that celebrates women in science, and developed a number of innovative programs for Middletown’s children and families.

About a year ago I left Middletown to start a new job and a new life in Ketchikan, Alaska, and only recently heard about the plan to close Green Street. The news was dismaying—Green Street is locally well-known, and a physical manifestation of Wesleyan’s commitment to engaging with the community. The work of the Center, providing educational enrichment and support to children in the North End, remains important—the need will not end with the closing of Green Street. I hope that Wesleyan will find a way to continue to support the work it began at the Green Street Teaching and Learning Center.